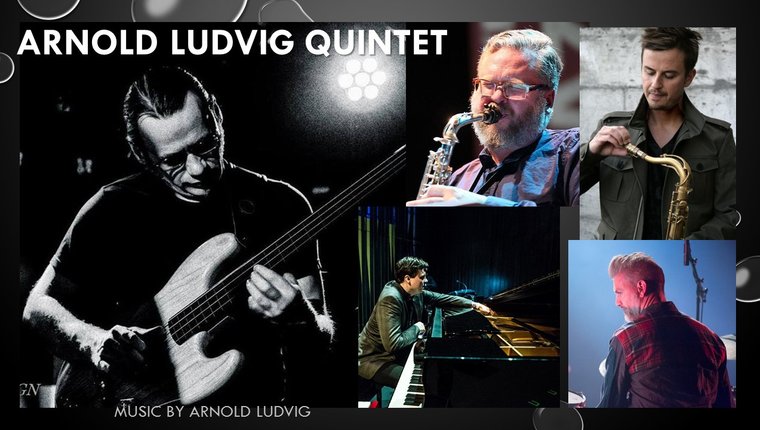 Arnold Ludvig is the composer of his new Reykjavík based jazz quintet, a high-octane quintet comprised of great musicians, composers, and award winners.

Arnold is currently composing and working on a new concept for an upcoming album with the quintet.

The music is Nordic jazz with a wide variety of jazz related stylistic tendencies such as latin, funk, blues ,folkloric music, including a new approach with high-level interplay and lots of room for improvisation.

Arnold Ludvig won Album of the Millennium Award w/ Terji & Føstufressar in 2000 for their 1st 1990 album. He won the 2005 Atlantic Music Event Award for Best Bassist and Best Band with GoGo Blues.  Arnold won Album of the Year for the album, TVEY, with Terji & Føstufressar, in 2010 at the Planet Awards.  He was nominated as co-arranger for Best New Act of the Year with Kátir Kallar, at the 2016 Faroese Music Awards for Jazzbók Føroya Fólks album. In 2017, Arnold was nominated for Soloist of the Year as bassist, and Band of the Year, as composer of the Arnold Ludvig Sextet, for his ICELAND album, at the 2017 Faroese Music Awards.

He won the Band of the Year Award at the 2018 FMA with Alda Magna, for their latest release, Traces of Time.

Kjartan Valdemarsson:  won the 2001 Icelandic Music Award (IMA) for best composition in the Jazz category.  Kjartan was nominated for the Nordic Council Music prize in 2016.

Jóel Pálsson:  has been awarded 6 times at the Icelandic Music Awards (IMA) for his albums, thereof 5 awards for Jazz Album of the Year.  Jóel was nominated for the Nordic Council Music prize in 2011 and 2016. Jóel won with the band, ANNES, for Best Jazz Album at the 2018 IMA for their 2017 album, Annes.

Sigurður Flosason:  was nominated for the Nordic Council’s music prize in 2000 and 2003 and is a 5 time winner of the Icelandic Music Awards (IMA).  He was also nominated for the Danish Music Awards in 2011 for a recording with Danish singer, Cathrine Legardh.  Sigurður won for Best Jazz Compositions at the 2018 IMA for his 2017 album, Green Moss Black Sand.